20 Insane Computer Facts That Will Blow Up Your Mind. 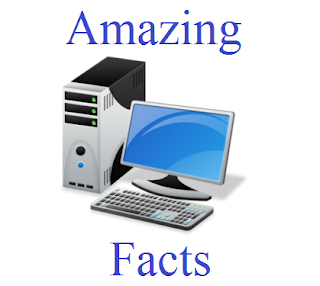 Hello Readers! Instead of tutorials of Hacks or Tricks, I'm presenting you 20 Awesome Facts about computer. As you know that computers are enhancing the technological growth with a rapid speed. The more we know about this super machine, is less.

1. There are approx. 6,000 new computer viruses released every month.

2. Doug Engelbart, invented the first computer mouse in the year 1964 and it was made up of wood!

3. It is believed that the first computer virus released in the world was a boot sector virus, which was
created in the year 1986 by Farooq Alvi brothers. It was designed by them to protect their research
work.

4. A normal human being blinks 20 times in a minute, whereas a computer user blinks only 7 times a
minute!

5. TYPEWRITER is the longest word that can be made using the letters only on one row of the keyboard.

6. While it took the radio 38 years, and the television a short 13 years, it took the World Wide Web only
4 years to reach 50 million users.

7. The first domain name ever registered was Symbolics.com.

9. The world's first computer, called the Z1, was invented by Konrad Zuse in 1936. His next invention,
the Z2 was finished in 1939 and was the first fully functioning electro-mechanical computer.

10. Domain names are being registered at a rate of more than one million names every month.

11.  The house of Bill Gates was designed using a Macintosh computer.

12. The group of 12 engineers who designed IBM PC were called "The Dirty Dozen".

13. One of the world's leading computer and computer peripheral manufacturer Hewlett Packard was
first started in a garage at Palo Alto in the year 1939.

14. On eBay, there are an average of $680 worth of transactions each second.

16. The computer mouse, the windowing GUI, laser printing, and the network card were all developed
at one company; Xerox in Palo Alto, California.

17. The computer in your cell phone has more processing power than all the computers in the Apollo 11
Lunar Lander that put 2 men on the moon.

18. 'Crash Course' is another name for Microsoft Windows tutorials.

19. Although we normally think of computers as the ones we use in our everyday lives to surf the
web, write documents etc, small computers are also embedded into other things such as mobile
phones, toys, microwaves and MP3 players. We use computers all the time, often without even
knowing it!

20. Almost all computer users must know how destructive a virus can be. But then, it would be
interesting to know that a virus cannot corrupt your PC on its own. It corrupts your system only
when you activate it by either downloading infected files from the Internet or by sharing these infected

Weren't the above Interesting Facts awesome? Thanks for Reading...

Title : 20 Insane Computer Facts That Will Blow Up Your Mind.
Description : Hello Readers! Instead of tutorials of Hacks or Tricks, I'm presenting you 20 Awesome Facts about computer. As you know that compute...
Rating : 5

5 Responses to "20 Insane Computer Facts That Will Blow Up Your Mind."

Get All The Latest Updates Delivered Straight Into Your Inbox For Free!

What's Hot on the site